Social workers typically choose their career field for reasons other than money. Nevertheless, many positions in the field can pay surprisingly lucrative salaries, both for young professionals and those who enter the field later in their careers.

As of 2018, the median annual salary for social workers stands at $49,470, according to the Bureau of Labor Statistics (BLS). However, this number varies according to education level, location, and subfield.

Social workers employed in mental health and careers helping those with substance use disorders enjoy the highest salaries in New Jersey with an average annual wage of $79,130. California, Connecticut, Washington, D.C., and Oregon also pay lucrative wages for social workers who specialize in these fields.

The top paying social work jobs lie primarily in the healthcare field and in federal agencies.

Healthcare social work is not only a well-paid profession, but it’s also a growing one. Like the populations of other developed nations, Americans are rapidly aging. According to the U.S. Census Bureau, Americans who are 65 and older will outnumber those younger than 18 by the year 2035. The future of work, therefore, lies in professions that assist an older population such as healthcare and technology. Social workers who serve older adults tend to have clients on the younger end of the spectrum — adults 55 to 74 —rather than adults 75 and older.

Social workers employed by the federal government can earn an average annual wage of $77,610, putting them among the highest paid professionals in the industry. Most federal social workers (26,000) work for the Social Security Administration, according to research from the National Association of Social Workers. Other major employers include the Veterans Administration, the Department of Defense, the Department of Justice, and Health and Human Services. Many federal social workers live in the Washington, D.C. area, which is known for its higher wages for social work positions.

While social work may not have a reputation for being lucrative, the numbers can tell a different story. This is particularly true for individuals with advanced degrees, as well as those who live in certain areas or specialize in a particular field. Ultimately, like other professions, a well-paid social work job relies on both your professional surroundings and your level of expertise.

If you’re ready to reach your full potential, an online degree can help you get there. Discover the possibilities for what’s next in your career. 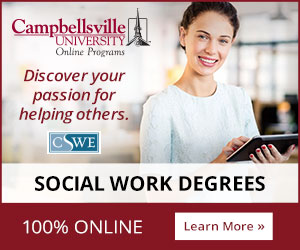 Complete the form below for detailed course information and to be contacted by phone and email.